In the open ocean, eukaryotes matter! 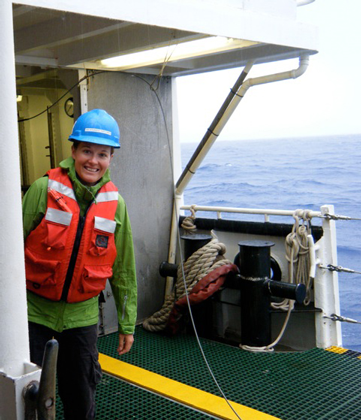 Sarah Fawcett while working on a research vessel to collect samples in the Sargasso Sea.

Despite being the Earth’s most expansive ecosystem, the subtropical and tropical ocean is a frontier in our understanding of life on Earth. In recent times, our view of this environment has been repeatedly overturned. Take, for example, the phytoplankton: the floating single-celled plants that generate chemical energy by photosynthesis and thus support all of ocean life. It was once believed that the “eukaryotes,” the cells of which contain nuclei and other complex structures, dominated the phytoplankton population. Over the last twenty-five years, this view has given way to the recognition that cyanobacteria and other prokaryotic (non-nucleus bearing) organisms are the most abundant form of life in the open ocean. The narrative over this time has been the ascension of prokaryotes as king of the high seas. In this state of affairs, a nagging question has been whether and how the genetic diversity of the phytoplankton matters for the economies of energy, carbon, and nutrients in the open ocean.

In the first of work of its kind, Princeton Geosciences graduate student Sarah Fawcett has forced a partial reversal against the prokaryote-dominated paradigm of the open ocean and, in the process, showed one important way in which the genetic diversity of the plankton relates to functional diversity (that is, not all the phytoplankton are doing the same thing!). In a recent paper, Fawcett and her colleagues show that small eukaryotic phytoplankton are far more important for taking up upwelled nutrients and for transporting atmospheric CO2 into the ocean interior than their numerical abundance implies. This surprising finding has just been published by the scientific journal Nature Geoscience in their advanced online publication section, before going to press in a future edition of the journal.

Photosynthesis is the biological process that converts carbon dioxide into organic carbon, by trees on land and by microscopic marine plants (phytoplankton) in the ocean. Nitrogen is essential for photosynthesis, and it is predominantly supplied to the sunlit surface ocean either as nitrate from depth or as ammonium recycled within the surface. Phytoplankton growth on deep nitrate is termed ‘new production’ and ammonium-supported growth is known as ‘regenerated production.’

One major consequence of ocean biology is that it lowers the carbon dioxide content of the atmosphere by storing it in the deep sea. Changes in the efficiency of this storage likely explain past changes in atmospheric CO2, which in turn have affected climate. The storage mechanism, known as the ocean’s “biological pump,” consists of photosynthesis in surface waters and the subsequent sinking of organic matter into the deep sea, where decomposers break down the organic matter to CO2 and nutrients, which are now locked away in the stagnant deep ocean. It has been a great unknown as to which phytoplankton in the surface are responsible for the uptake of nitrate from below and the rain of organic matter back into the deep ocean, or if indeed all phytoplankton participate equally in this process. In the Sargasso Sea, an area in the subtropical North Atlantic where Fawcett conducted her study, the supply of nitrate to the surface is limited, such that most phytoplankton growth is thought to be supported by ammonium, and not nitrate. One way to trace the sources of nitrogen to phytoplankton is to measure the naturally occurring ratio of nitrogen isotopes in marine particles. Very simply, a low nitrogen isotope ratio implies growth on ammonium, and high particle nitrogen isotope ratios imply dependence on deep nitrate. In the past, researchers have measured the nitrogen isotope ratios of bulk particle collections, and as expected for the nitrate-limited Sargasso Sea, the ratios were low. However, these particle collections included not only phytoplankton but also non-photosynthesizing organisms and dead material that can mask the nitrogen isotope ratios of the photosynthesizers. 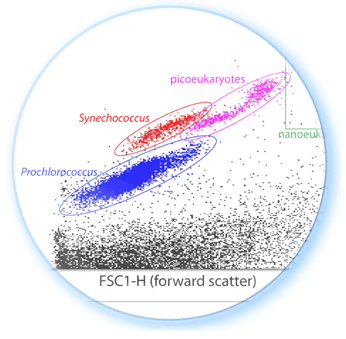 To overcome this problem, Fawcett used flow cytometry (see fig. 1) to separate the important Sargasso Sea phytoplankton populations, not only from one another but also from any non-photosynthesizing organisms or dead material. Using a high-sensitivity method for nitrogen isotope analysis developed in the Sigman lab at Princeton, she then measured the specific nitrogen isotope ratios of these sorted populations. Fawcett found that the small prokaryotic phytoplankton (Prochlorococcus and Synechococcus) have a low nitrogen isotope ratio, implying that their growth is supported exclusively by ammonium, in keeping with expectations for phytoplankton growing in the nitrogen-limited Sargasso Sea. However, the slightly more complex (but not much larger) eukaryotic phytoplankton have a high nitrogen isotope ratio, indicating that their growth is supported by nitrate; a simple calculation revealed that these eukaryotes rely on this nitrate for more than 50% of their nitrogen requirement. This finding is surprising given that nitrate is usually undetectably low in Sargasso Sea surface waters, and also because the clearly different isotope ratios of the prokaryotes and eukaryotes implies that these groups of organisms are biochemically distinct, despite the minimal difference in their cell size.

In addition, the nitrogen isotope ratio of the eukaryotes is similar to that of organic material sinking out of the surface, suggesting that sinking material derives largely from eukaryotic, not prokaryotic, phytoplankton biomass. The larger implication of this observation is that the Sargasso Sea’s biological pump is driven by eukaryotic phytoplankton, despite their being two orders of magnitude less numerically abundant than the prokaryotes.

With climate change predicted to result in a warmer surface ocean and potentially alter phytoplankton community composition, one open question is whether phytoplankton diversity is important for ocean processes. Fawcett’s results provide an example where the answer to this question is a clear ‘yes’.

To lead in science as in many human endeavors, it is sometimes necessary to take the most difficult avenues. Fawcett’s development of a state-of-the-art approach and its application to a central question in ocean science provides an example of such risk-taking and the fruits that it can bear. By encouraging students to identify opportunities, take judicious risks and occasionally sail against the current, Princeton strives to prepare its students for leadership.

Caption for figure S1 above: The different phytoplankton populations in the Sargasso Sea as separated by flow cytometry. Approximate cell size (FSC1-H) is shown on the horizontal axis, and the amount of chlorophyll (650LP-H; essential for photosynthesis) is shown on the vertical.