Phytoplankton utilization of nitrogen in the surface ocean

Bess Ward and her group from Princeton University, joined by Malcolm Woodward from the Plymouth Marine Laboratory, are embarked on a 25 day cruise in the subarctic North Atlantic as part of an NSF funded project “Dimensions of Biodiversity:  Functional Diversity of Marine Eukaryotic Phytoplankton” (Ward and Sigman PIs). The goal of the project is to investigate the taxonomic, genetic and functional diversity of eukaryotic phytoplankton and link diversity and assemblage composition to the carbon and nitrogen biogeochemistry of the surface ocean. Taxonomic diversity will be investigated by identifying the components of the phytoplankton assemblages using molecular, chemical and microscope methods.  Genetic diversity will be explored at several levels, including direct sequencing of clone libraries of key functional genes and metatranscriptomic sequencing and microarray analysis of size fractionated/flow cytometrically-sorted phytoplankton assemblages.  Using natural abundance and tracer stable isotope methods, we will link genetic and taxonomic diversity to functional diversity in C and N assimilation in size-fractionated and taxon-sorted populations.

In our previous work using similar methods in the Sargasso Sea, we found that small eukaryotic phytoplankton and prokaryotic picoplankton could be distinguished by their nitrogen stable isotope signatures, implying that the two groups rely on different sources of nitrogen.  The eukaryotes were disproportionately important in the assimilation of nitrate, sometimes relying almost entirely on nitrate for their nitrogen needs, even when nitrate is present in the surface water at vanishingly low concentrations.

The project involves four cruises, two in the Sargasso Sea and two in the subarctic North Atlantic, two environments where the contributions of eukaryotic and prokaryotic phytoplankton are expected to be quite different.  The current cruise departed from Morehead City, NC on 22 August on a transect towards Iceland [Figure 1].  A dawn station every morning provides samples for nutrients, isotopic analysis and primary production measurements.  At two process stations around 50N 20W, differential N utilization will be investigated using natural abundance [Figure 2] and tracer N isotope methods.  Woodward’s real time measurements of low level dissolved inorganic nutrient concentrations [Figure 3] provide the crucial information necessary for the incubations [Figure 4], which are the primary experimental basis of the project. He has set up several instruments to make measurements of the complete suite of inorganic nutrients at nanomolar to micromolar levels.

After the process stations, the cruise ends in the Azores.  A repeat cruise in May of 2014 will carry out the same experiments at the time of the spring bloom.  We expect to find major ecological contrasts in process rates and phytoplankton community composition between the August and May seasons, likely reflecting differences in the major N utilization pathways and fates of primary production. 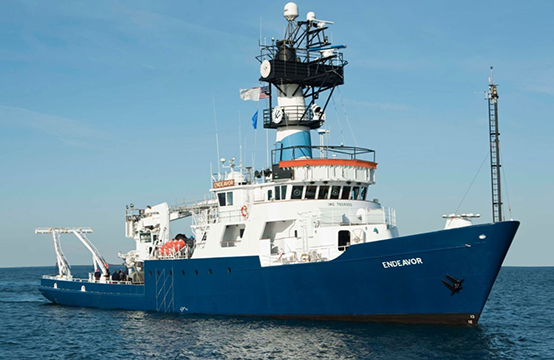 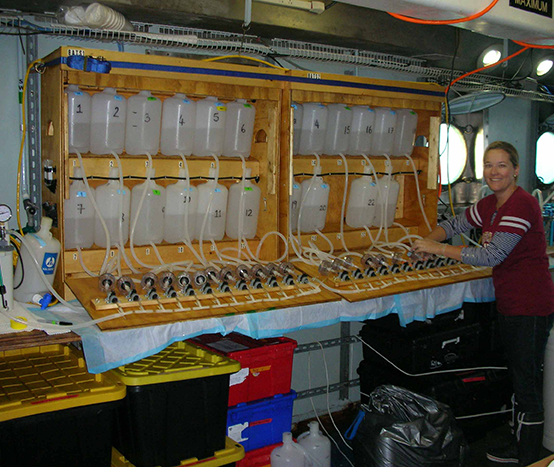 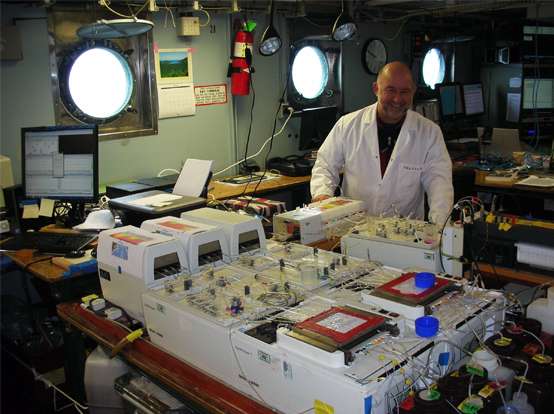 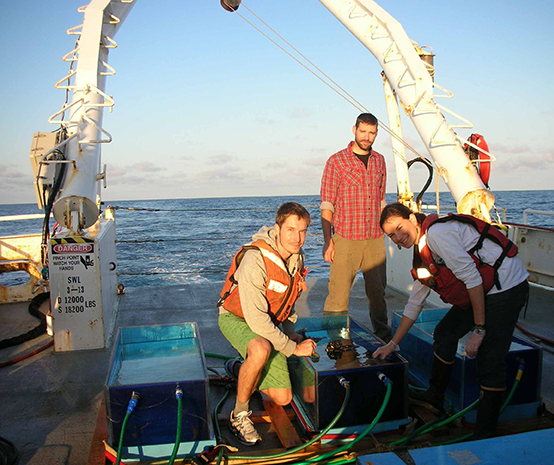